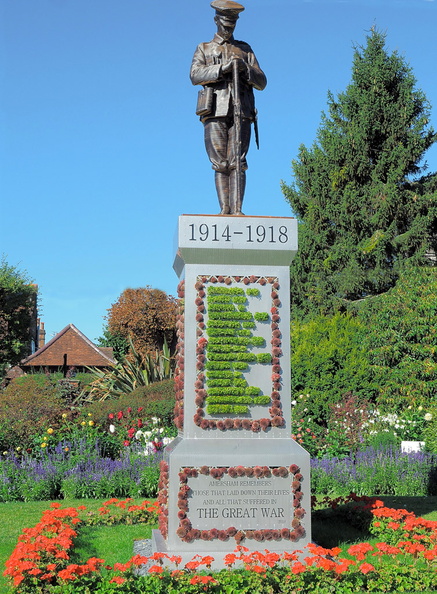 The ‘Great War' memorial was erected as part of a project held in the summer of 2018 at the Memorial Garden in Old Amersham to commemorate the 100th anniversary of the ending of WW1. It was located near the original war memorial.
Author: B Hunt

What passing-bells for these who die as cattle?
Only the monstrous anger of the guns.
Only the stuttering rifles' rapid rattle
Can patter out their hasty orisons.
No mockeries now for them; no prayers nor bells;
Nor any voice of mourning save the choirs,
The shrill, demented choirs of wailing shells;
And bugles calling for them from sad shires.
What candles may be held to speed them all?
Not in the hands of boys, but in their eyes
Shall shine the holy glimmers of goodbyes.
The pallor of girls' brows shall be their pall;
Their flowers the tenderness of patient minds,
And each slow dusk a drawing-down of blinds.

Here's my take on one of my favourite poems, which has been widely published.
'Anthem for Doomed Youth' by Wilfred Owen is arguably among the most powerful of World War I poems. He wrote it while recovering from the trauma of battle in a Scottish hospital in 1917. As with many anti-war poems it is a clear statement against the futile waste of human life that hellish wars produce. Even the choice of the word 'doomed' implies an ill-fated inevitability of death from the 'monstrous anger of the guns', the relentless fire of rifles and the wailing of shells. These are the daily horrific realities of war. There is nothing glorious about the relentless destruction of young men he implies.

Right from the start he argues that the usual tributes to the dead are practically meaningless: 'What passing bells for these who die as cattle?' But it is not just the rituals that mark memorial services he thinks are irrelevant. In comparing young soldiers to cattle , he calls to mind a sense of wanton slaughter as being the price of war and suggests a sense of disposability.

Continuing in this vein Owen argues that the grief and sorrow for this loss is ill-served by the tributes from the prayers ('hasty orisons') and choirs. To him they reflect the pompous attitudes and meaningless rituals of flag-bedecked ceremonies that often surround war. The poem's poignancy is seen in remembered farewells and the acute grief and mourning of loved ones, particularly the 'girl's' who may be sisters, wives or girlfriends. Finally, the daily 'drawing-down of blinds', evokes a kind of meaningful ritual by those who do remember and live on after the war.